Russia has become one of the most popular countries for those who are looking to study abroad, as it is located in North Asia and Europe, with a huge area of ​​about 17 million square kilometres, with a population of 147 million people. It shares borders with many countries such as  Kazakhstan, Ukraine, China, and Poland. Russia has a high ranking level of education among international universities, coming in the 49th level in the index of education in the United Nations Development Program for 2019. Russia has academic and cultural diversity and an elevated quality of life. In Russia, there are about 200 thousand students from all countries around the world are studying in its universities for these following reasons:

First of all, Russia is considered one of the best educational systems of groups since the 18th century, It has the lowest illiteracy rate of only about 2%.In addition, according to the Economic Cooperation and Development Organization, Russia has the most educated population, which surpassing Europe, Japan, and the United States. Second, a study in Russia gives students great choices in their fields of study, because they have programs such as literature and art. They, also, teach the works of great famous Russian writers and philosophers such as Fyodor Dostoyevsky and Anton Chekhov. It also has many fields of science such as mathematics, physics, chemistry, engineering, and medicine. They have the best programmers, chemists, engineers, and doctors. Third, the language in Russia is a must in daily interactions. That is why Russia gives great importance to teaching the language. Therefore, they apply the teaching of the Russian language through practical courses through direct contact and social dealings whether in buying, selling, riding transportation, or studying. Fourth, the preparations of the Russian universities are considered as highly equal as the western and American universities are. Fifth, International recognition of the Russian university certificate for joining the Bologna Declaration, makes its certificate acceptable and recognizable in 60 member states of the Bologna process, including Finland, Cuba, France, Spain, India, Cyprus, China, Venezuela, and Vietnam. Sixth, cultural and ethnic diversity in Russia makes you easily adapted to your colleagues and get used to customs and traditions, as you can find about 200 ethnicities living in Russia, including different religions and nationalities. Actually Russians form 79% of the total population, Tatars are 3.8%, Ukrainians are 1.2 and Gouvach is 1.1%, while ethnicities that are not classified are about 12 %, Orthodox Christianity constitutes 20% of the total population, Islam 15%, and other religions 2%. Seventh, the cost of living in Russia is low in terms of the European Union. Finally; Last year,  Russia invited 17,000 students to its universities from all over the world to study there and provided  300 universities to them that can choose freely from, and  here we review the top 10 universities in Russia: 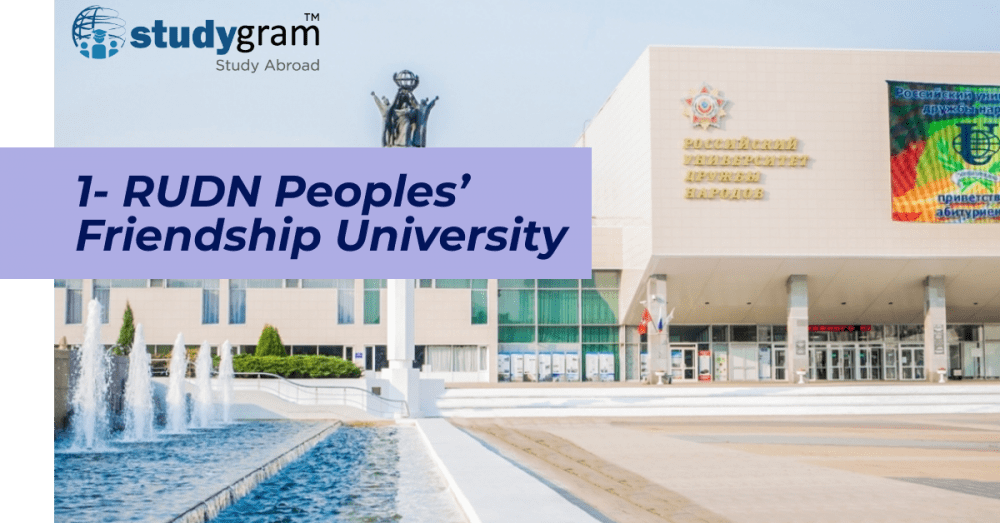 The university was founded on February 5, 1960, by the government of the USSR. On 4/22/1961, Rodin University was named after Patrice Lumumba - one of the symbols of the African people struggle for independence. Students and academics can be free to pursue learning, teaching and research activities at the university, without being subject to the political context, but they are strongly oriented to the major principles of friendship and mutual support. On February 5, 1992, by a decision of the government of Russia, the name of the university was changed to the People's Friendship University in Russia. 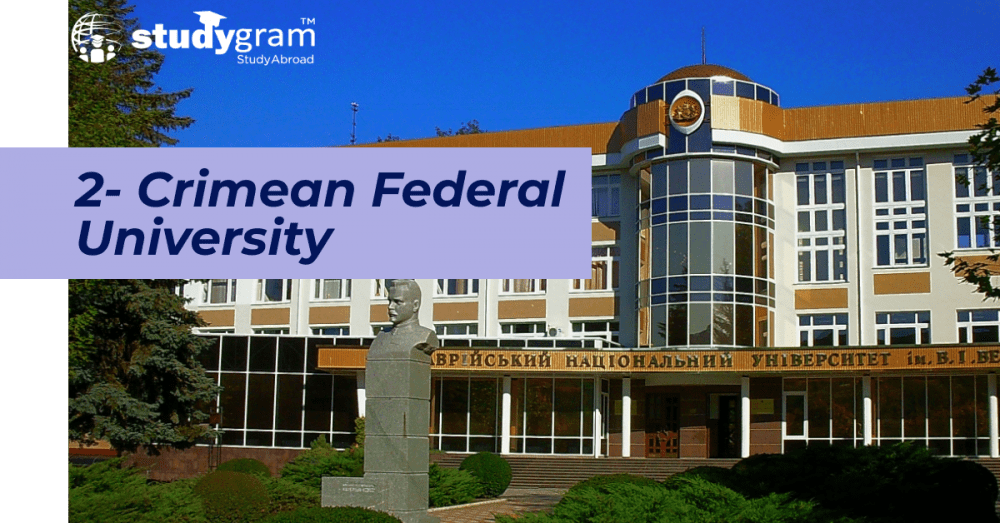 While developing Crimea as a spa, it was decided in 1930 to organize a higher medical school here. The Crimean Medical Institute was opened on April 1, 1931.

The university has 23 academic and non-academic units and 12 branches located throughout the Crimea, including 10 academies and institutes, 7 colleges, 11 branches, 11 institutions, and research and scientific centres. 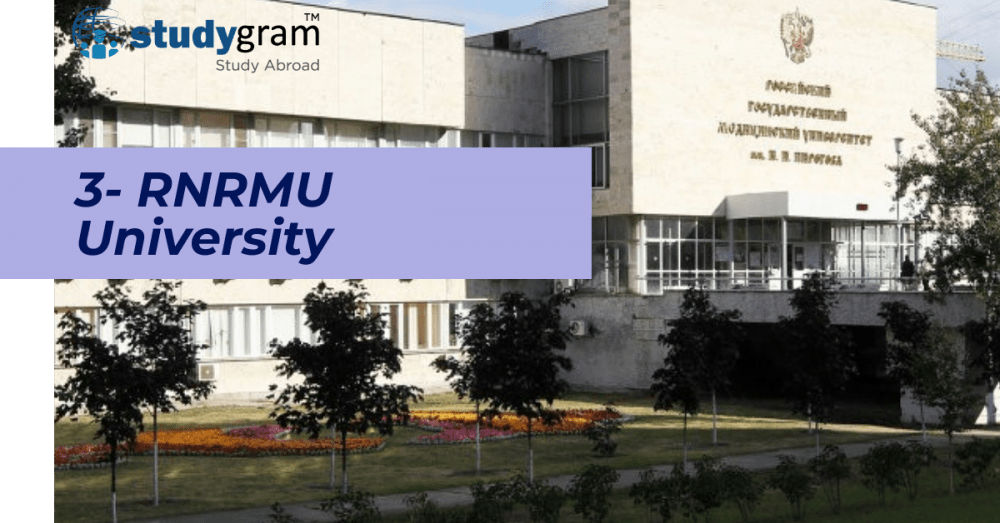 The Institute of Medical Education in Moscow, Russia, founded in 1906, is fully accredited and recognized by the Russian Ministry of Education and Science, and is currently under the authority of the Ministry of Health and Social Development.

The Russian RNRMU National Research University ranked among the leading Russian universities in the ranking of the effect of Thames for Times Higher Education 2019 in SDG Good Health and Welling. The impact of universities was first categorized to identify universities worldwide for their social and economic impact. 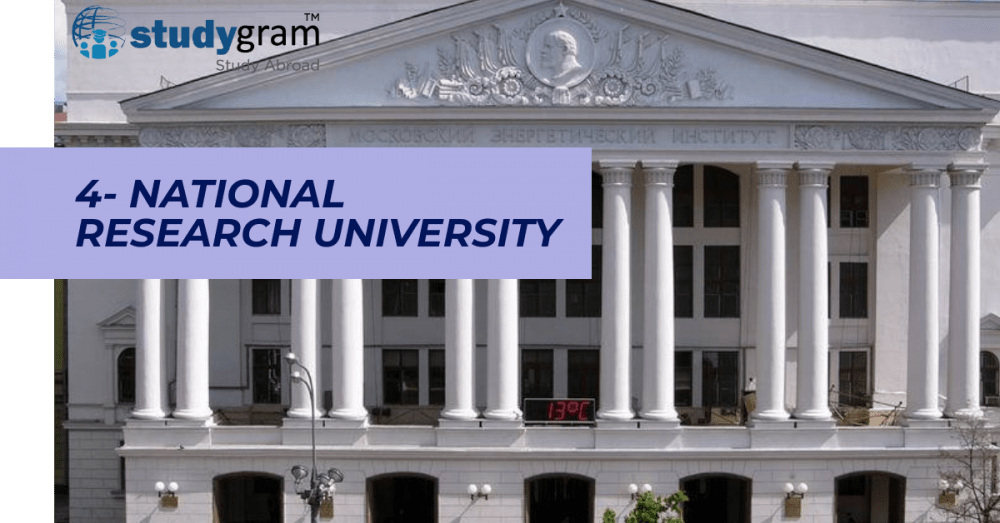 The Institute of Energy Engineering in Moscow was established in 1930, and is one of the technical universities in Russia specializing in the fields of electrical engineering, energy and computer science. 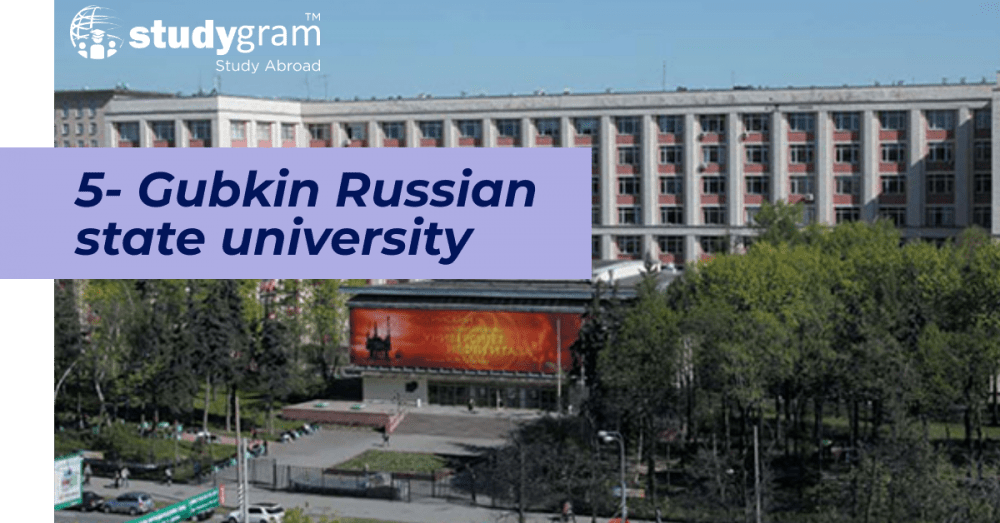 The Russian Jobkin University was established in 1918 when the Moscow Mining Academy was established, the Russian universities did not train or prepare petroleum engineers, all the disciplines related to oil were prepared through mining, chemist, mechanical, and other engineers, and at that time the province needed oil, and it was necessary to train petroleum engineers In order to be able to extract the oil and treat it to be ready for use, on 5/8/1920, the Petroleum Engineering Department was established at the university. 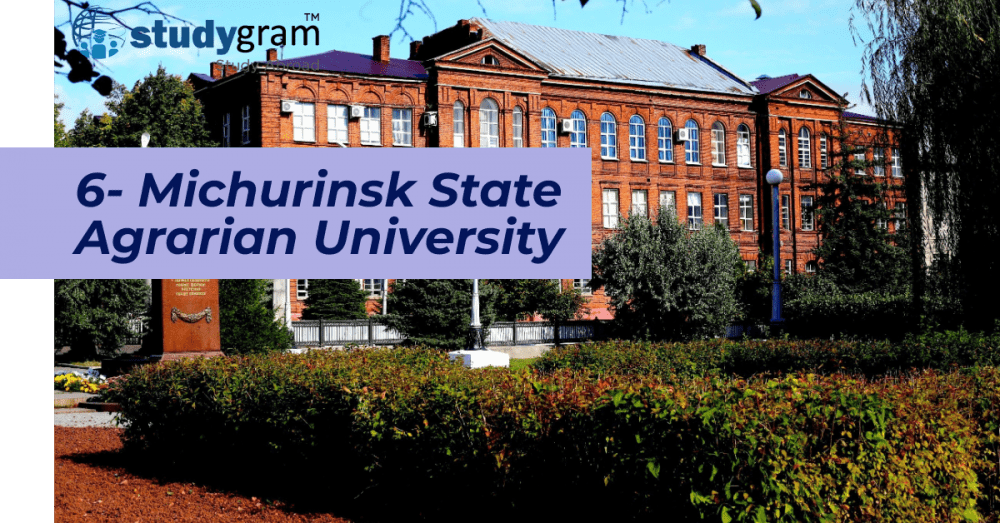 Michurinsk State Agrarian University is one of the first agricultural universities in Russia and is well-known for its specialization in horticulture and agricultural scientific research.

The university used to specialize in the fields of the garden and about 40,000 professionals graduated from it in various fields of agriculture, agricultural and food production in Russia. 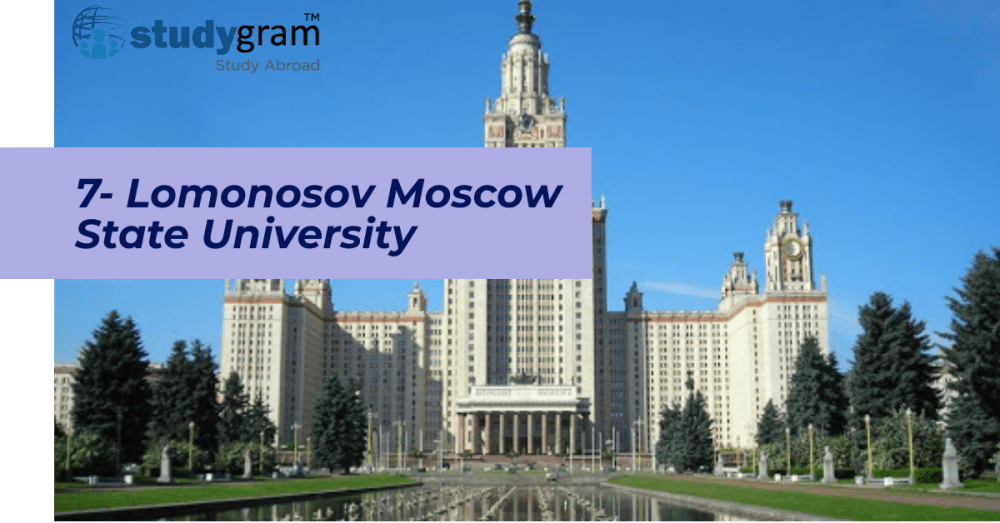 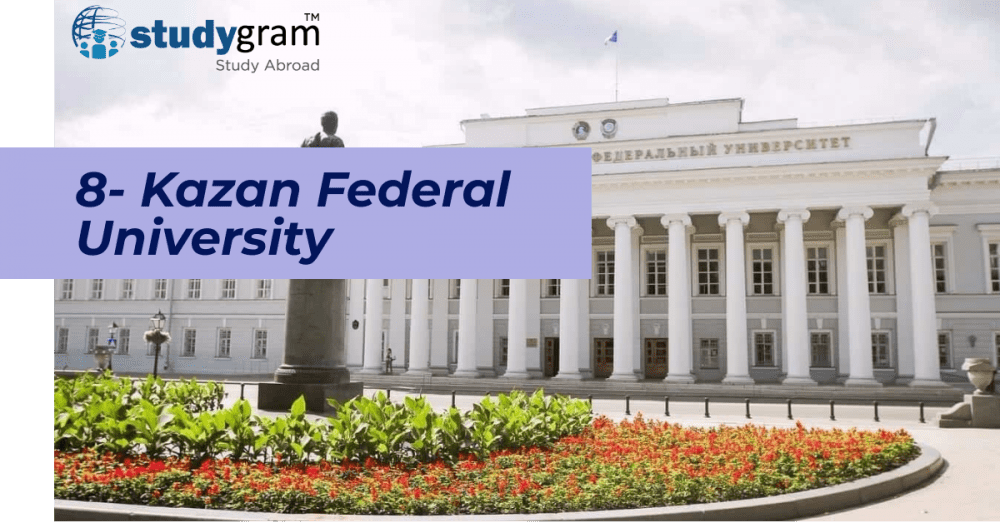 Kazan Federal University is one of the oldest universities established in Russia, it was established 216 years ago, which is famous for its many graduated scientists who served Russia.

The university consists of 14 units, two of them are regional branches, 50,000 students enrolled in more than one postgraduate and bachelor's degree program, and annually receive approximately 9,700 international students from 106 countries. 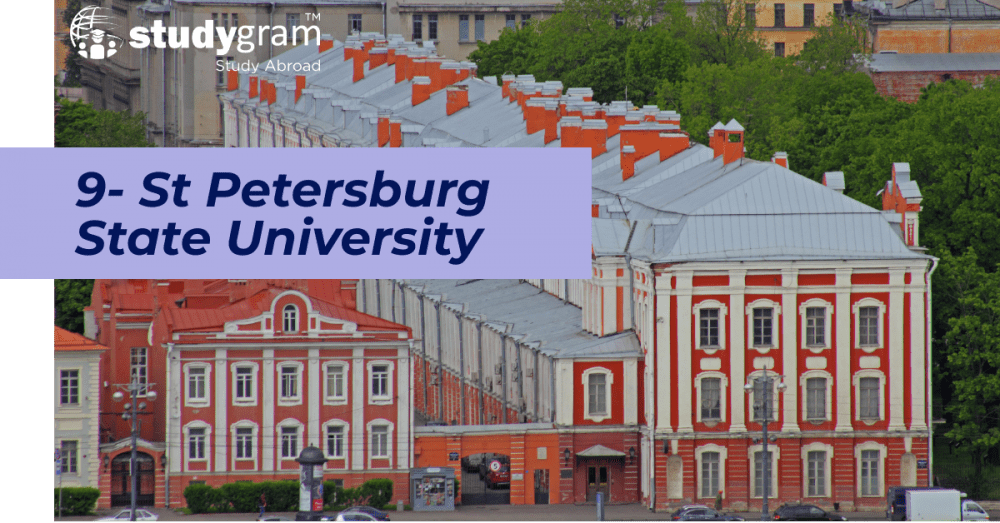 St Petersburg State University began in the year 1724, and it combines ancient heritage with modern innovations, research and learning. The university obtained a leading international position in the field of science, education, and culture, and a large number of the university's graduates received the Nobel Prize for Physics and Medicine.

The university cooperates with 230 Ali institutions of education from Europe, North America, Asia, and South America. Southwest State University is located in Central Russia and the university building sites differ from the field. The university is one of the largest universities in Russia, and it accommodates 11,000 students in 100 fields of study such as engineering, science, humanities and social sciences. Qualified Russian language teachers can teach students to speak Russian within one year.

For a free consultation about study in Russia please register